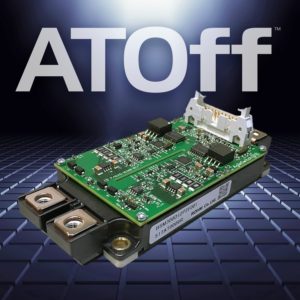 The Augmented Turn-Off (ATOff™) technique addresses two significant impediments to the successful implementation of silicon carbide modules in high-power applications. By reducing both turn-off spikes and ringing both under normal operation as well as short-circuit conditions (DSAT), SiC MOSFET modules can be operated in the higher frequencies that enable dramatic increases in power conversion density.

“For us, it’s about making sure the devices operate as efficiently, reliably and safely as possible. The ultimate goal is to get the most out of these devices, since they are still emerging in the market and relatively expensive compared to non-wide bandgap alternatives – it’s important that every bit of performance can be extracted,” said AgileSwitch CEO Rob Weber.

PowerAmerica funding enabled AgileSwitch to implement its patented technique into EDEM3 evaluation systems and test the capabilities of the drivers and switches – often one of the costliest and time-consuming parts of getting a new product ready for market.

AgileSwitch hopes its ATOff™ technique will help accelerate the widespread commercial adoption of wide bandgap devices. Already, the company is seeing plenty of interest from various companies, partly due to connections it has made through PowerAmerica.

“PowerAmerica has helped us significantly with introductions to potential customers at the university, government lab and industrial levels. From our involvement, we have a long list of customers that we’re now working with,” Weber said.